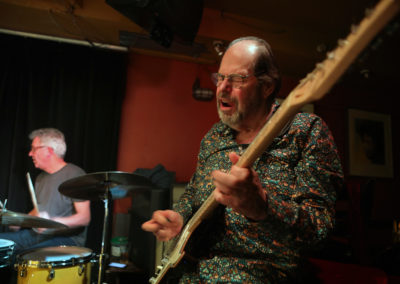 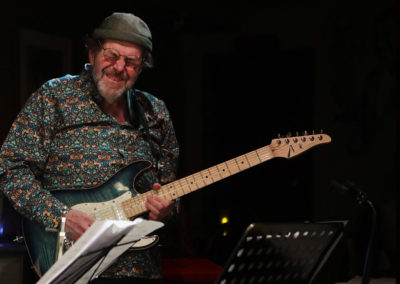 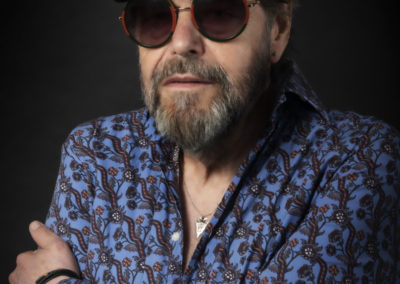 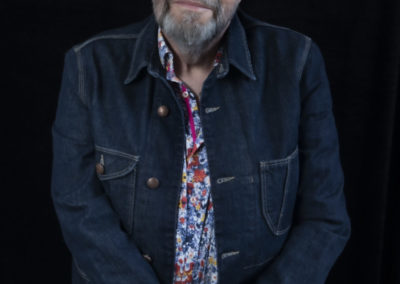 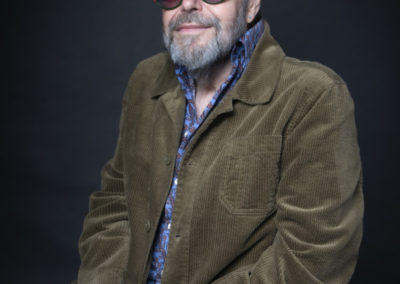 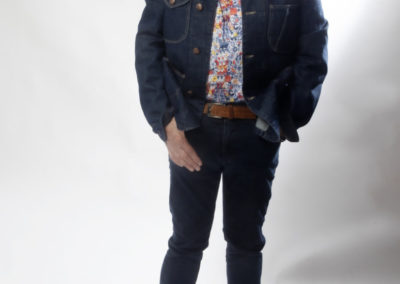 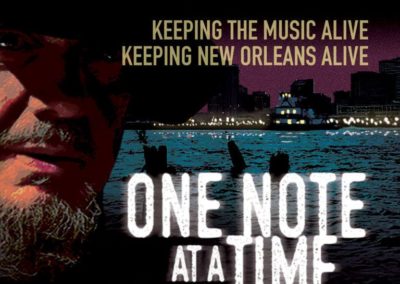 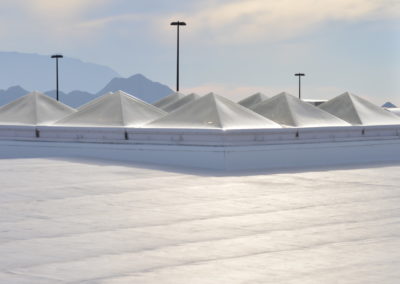 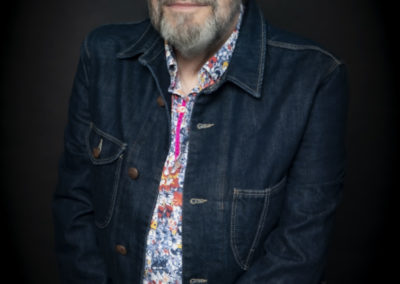 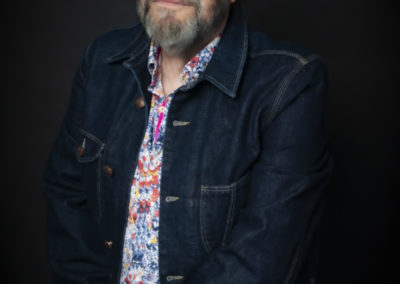 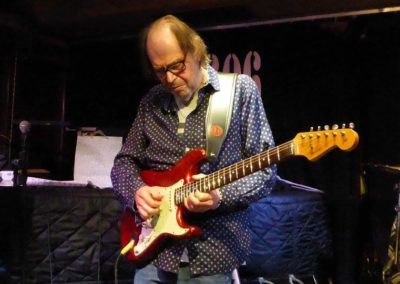 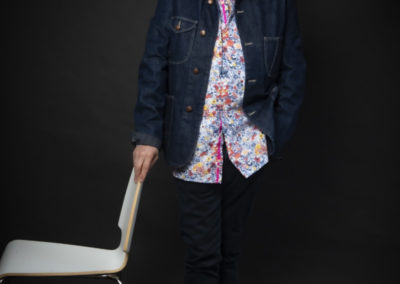 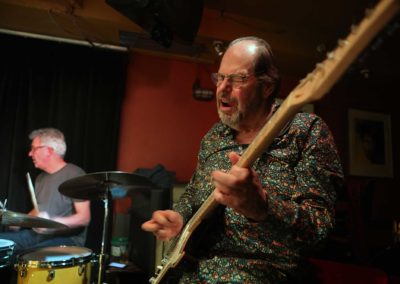 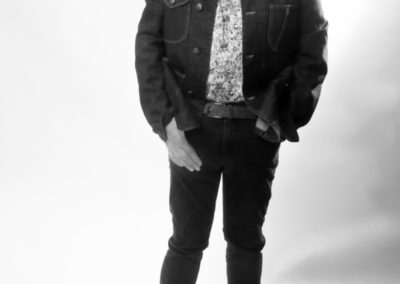 FROM JAMES BOND TO JIMI HENDRIX UP TO AVANTGARDE JAZZ, SIXTY YEARS OF MUSIC WITH RAY RUSSELL / THE INTERVIEW

Mediafrequenza meets the historic English guitarist who shared the stage with the best world rock stars. A PhD on improvisation among the awards of a career that still has a lot to say 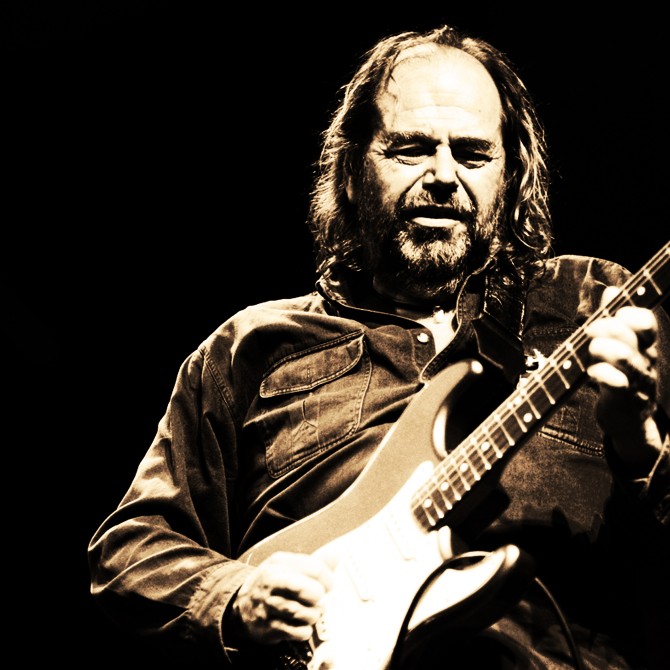 Ray Russell: mixing it up 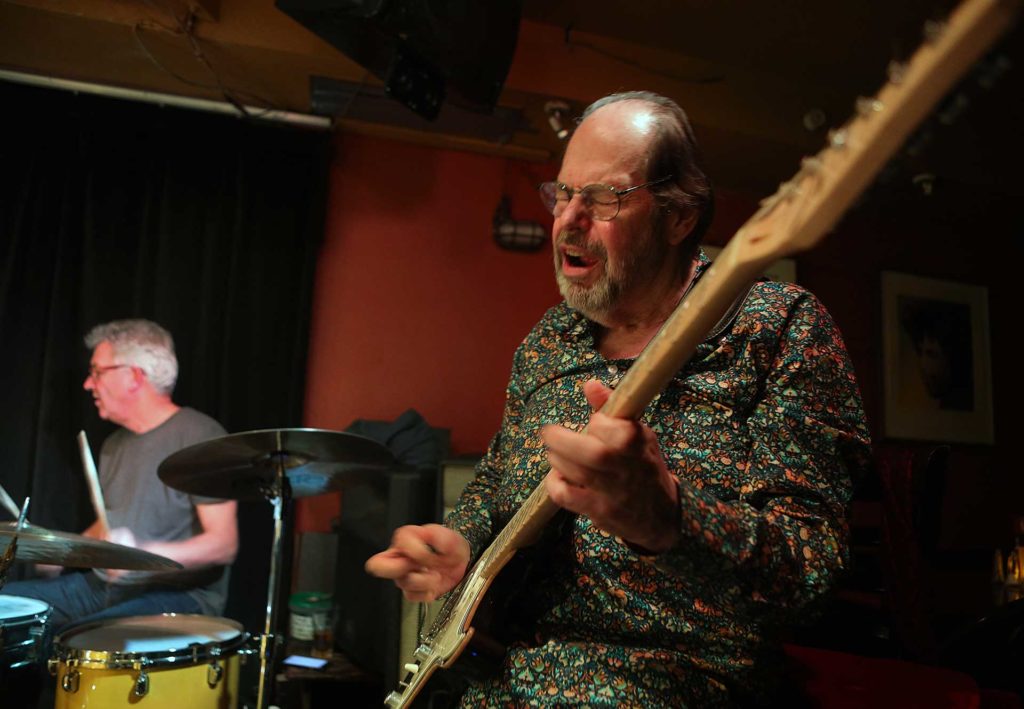 Many a veteran jazz musician has been awarded an honorary doctorate in recognition of a lifetime dedicated to the art. Few, however, after decades as working musicians, have been awarded a doctorate on the basis of actual academic research.

Seventy-four-year-old guitarist Ray Russell recently earned a PhD the hard way from Leeds Beckett University. “The PhD was about where improvisation comes from, how you become in the moment and come out with things you haven’t played before,” he explains. “I’m not an intellectual and it was very difficult and it was lucky that at the beginning I didn’t know what it entailed or I would never have done it. Especially towards the end, all you think about is getting it done.”

Russell’s thesis was entitled Fluid Architecture. That also is the title of his current album. “It’s from [German poet] Goethe, who said ‘If architecture is frozen music, then music is fluid architecture.’ I thought that was a great title.”

An observation about Russell’s playing by Sonic Youth’s Jim O’Rourke is alluded to in the title of one of the album tracks, Escaping The 6 String Cage. “I’d never thought about it like that before”, says Russell, “but I felt it described some of the stuff I play, trying to extend the parameters of the instrument, and was strangely poetic.”

The inspiration for another track, The Conversation, goes back to the 60s. “I

was touring with Cat Stevens and on the bill was Jimi Hendrix. One night I was in bed on the ground floor of the hotel and I saw Jimi’s face pressed against the window, saying ‘Let me in!’ He had locked himself out. So I let him in and we had a cup of tea and chatted and then he went off. He was quite reserved and shy and I didn’t think much of it at the time but later on it becomes one of those strange, surreal, unrepeatable experiences.”

Hendrix’s musicianship massively impressed Russell. “He was a great musician. He could play a lot jazz-wise and stuff you never heard on stage. He made a big impact on me. Part of me’s always been in rock and part in jazz and trying to get those facets together, [Hendrix’s music] was bound to influence you.”

The lyrical Moon Dog was, apparently, inspired by a dog that Russell rescued from war-torn Afghanistan. Can that really be true? “Yes, that was for Brin,” confirms Russell. “A friend, a captain in the Gurkhas, was in Afghanistan and there are lots of dogs running free there. And when we saw the photo [of Brin] we just wanted to get him back so my wife raised £4,000 by selling her car and against all the odds he got back and stayed with us until he died. And my wife did more fundraising and raised over £40,000 for the other stray dogs in Afghanistan.”

One For Geoff is an elegant, elegiac miniature, performed solo, in tribute to pianist Geoff Castle, a long time musical ally of Russell’s, who died in 2020. “On a gig he would always play something startling,” reminisces Russell. “He was a lovely guy and a great player and I loved him.”

Russell’s collaborators on the album include Chris Biscoe (tenor clarinet and soprano sax), Jim Watson (keyboards) and Simon Phillips (drums), musicians with whom he has worked in many different contexts over the years. Phillips’ solo on Turn Right At Ventura, to name but one, is spectacular. “I’ve known him since he was 16 and [our musical relationship] is more or less telepathic,” laughs Russell. “I didn’t give him any instructions. I just said ‘Just do what you want,’ and he played his own thing and it was great – it’s always great!”

In reflecting on his role as a bandleader on Fluid Architecture Russell recalls Gil Evans, in whose orchestra he toured in 1983. “At the first rehearsal he wrote different notes on some manuscript paper and tore it into strips. And he gave everybody a strip with one note on and said ‘This is your note but if you don’t like it, just play something else!’ And I thought ‘Wow. This is a Zen kind of experience!’ I was in awe of how he approached music. He was a great influence on me.”

Russell’s rock-informed playing on his early solo albums like Turn Circle (1968) and Dragon Hill (1969) antagonised some. “I got a lot of flak from purists about mixing genres up. It got to me slightly with them wanting to hear the guitar played like, say, Jim Hall or Wes Montgomery – who are fantastic and an influence – but it was not my chosen route. It just wasn’t me. This was the problem with a lot of jazz at that time: you had to sound like somebody else.”

Russell’s first professional gig was with The John Barry Seven, with whom he went on the road when he was 16, in 1963. “In those days the creature comforts touring were more or less nil. If we were lucky enough to have a place to stay, it would be a lorry drivers’ place. One was like a big air-raid shelter with 80 camp beds in it. And everybody would say ‘Leave your guitar in the van, it’s safer,’ and ‘If you’ve any money put it underneath you when you sleep.’ It was crazy but you just accepted it. And I grew up very quickly.”

Russell began increasingly to work as a session man. In 1969, for example, he played on David Bowie’s hit Space Oddity. “He wanted an extra acoustic guitar and I did an overdub,” he recalls. “I did a couple of takes and that was it. To be honest I don’t even know if he was there or not! It wasn’t a big experience. It was just a session.”

Russell has played with other rock legends, including Paul McCartney, with whom he performed at the Royal Albert Hall in 1997 at Music For Montserrat. The likes of Eric Clapton and Mark Knopfler also joined McCartney onstage. “I think it was on The Long And Winding Road, Paul turned round and just said very casually ‘Play a few licks if you want.’ So I did, and afterwards he said ‘That was nice!’ It was a great experience.”

A recording session for Marvin Gaye, in London, was less satisfying. “In that era studios were busy 24 hours a day. Sometimes we would finish so late we would sleep on the couch at the studio and start again at eight the next morning.

“For Marvin we were booked all day – me, Simon Phillips, Mo Foster [bass] and Mike Moran [piano]. He bypassed the studio and went into the control room and we played this song for seven hours. It got to seven o’clock and there was no response except [from the engineer] ‘Can we do that again?’ It was like a comedy. But we had other sessions to go to. So [we] went to the control room, and I said ‘We just have to go. And we’ve played this for seven hours: if it’s not there it’s probably not going to get there.’ And Marvin said ‘I’m going to make five phone calls to L.A. to make sure you never work in the States again.’ Mo said ‘Why not six?’ And we cracked up. And then we left.

“I loved Marvin’s stuff and it was a shame he was big time and unapproachable. But that’s the only really negative experience I ever had.”

Weirdly, Russell popped up on Antiques Roadshow last year, getting a valuation on a Bartell fretless guitar that George Harrison had given him. The two men had become friendly when Russell played on the soundtracks of films produced by Harrison’s company HandMade. “He said ‘I don’t use this guitar – I’m sure you can make more use of it,’ and he just gave it to me. It wasn’t the most playable of guitars, being fretless, but I used it now and again.”

A friend encouraged Russell to bring it to a recording of the TV programme. “[They] valued it at nearly half a million quid. It was a big deal – it turned up as part of Gogglebox and was a question on Ant & Dec’s Saturday Night Takeaway. It was ridiculous. I had no idea it would be valued at that or that people would get so excited.”

It was impossible for Russell to keep at home something of such value and reluctantly he sold the holy relic. “In the end it didn’t go for half a million quid – it went for £160,000. It was a lovely thing to have but I do have other things of George’s like books and signed things, that are more valuable to me personally. I would never sell them.”